The new Mizuno Wave Sayonara running shoe promises comfort as well as protection, lightness as well as stability. But how much does it live up to its promise?

The world of Mizuno has been offering runners with shoes and gear that are known to promise quality, comfort and strength. Mizuno offerings have been known to emphasize speed and lightness while also maintaining stability. The comfort and protection of the cushioning ensure each stride is taken safely.

The Mizuno Wave series is no different. Through its various offerings like the Rider, Prophecy and Hitogami, the Mizuno Wave line has been coming up with great, formidable trainers that have found few parallels in comfort and quality. The Wave Sayonara series is one such line that promises several exciting features. Great for road and track running, the Mizuno Wave Sayonara series promises a lightweight, fast and powerful run to its wearer. But let’s see if it lives up to the promise.

The sole unit, made of ‘Parallel Wave’ and ‘U4ic’ midsole for cushion and propulsion, is the same as the previous variants, with a few modifications here and there. With its lightweight, firmness and flexibility, the Mizuno Wave Sayonara promises to be everything serious runners look for in a shoe.

The Mizuno Wave Sayonara 4 is available on Amazon for $. The earlier variants are available for cheaper at $, also on Amazon.

How Does It Compare

The Mizuno Wave Sayonara series has been a trusted offering from the Mizuno world. Let’s see if the fourth variant stands its ground:

The Nike world has been offering formidable lines in sports shoes, gear and apparel for many decades. In direct competition with the Mizuno Wave Sayonara 4 is the Nike Air Zoom series’ Pegasus 33. Let’s see how it fares: 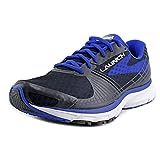 The Brooks Launch 3 is a neutral running shoe available in the market in the same price range as the Mizuno Wave Sayonara 4. Let’s see if the Brooks shoe has something more to offer.

The shoe’s mesh upper makes it highly breathable and provides the foot with ventilation, even through long distances.The range is exciting for its vibrant options of colours, from subdued to flamboyant.

The lightweight of the shoe makes it quick to respond to the wearer. While it’s very fast it also maintains a firm base to provide support during longer runs.

While the mesh upper allows breathability it also lets in too much water during rains or if running on a watery surface, adding weight and making the shoe uncomfortable. The asymmetrical lugs on the outsole enhances grip but leaves room for improvement.

Finally, the Mizuno Wave Sayonara 4 is great for neutral running, especially longer distances as it stays durable and provides ample cushioning and a firm base. It’s lightweight quality also enhances speed while midsole remains responsive throughfout. There are issues with the grip and when running in the rain, but its price, durability and speed makes it a great investment nevertheless. We give it 4/5 stars.